Dave Firle, near Fairfax, MN, conducted a field trial with various nitrogen rates and Envita™ (a nitrogen fixing bacteria) combinations. The corn hybrid used was 7803 VT2P RIB and the field was corn after beans with conventional tillage.

For evaluation purposes and to gain a sense of the Envita and nitrogen benefit, three rates of nitrogen and two rates of Envita were applied. Fertilizer nitrogen rates of 80 lbs., 130 lbs., or 180 lbs./acre (grower standard) were applied, with and without Envita. Envita has a use rate of 3.2 fluid ounces per acre and was applied in furrow at planting. Envita can also be used as a foliar application option at the same rate.

Overall, with the high rate of nitrogen (180 lbs./acre), adding Envita in furrow at planting resulted in an extra 4.9 bu/acre as illustrated in figure 1. Figure 1 shows the average of three strips: with and without Envita.

There are a couple points of learning from this trial: 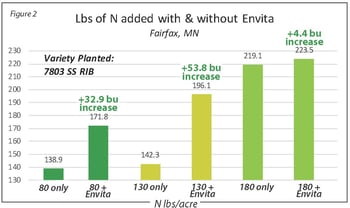